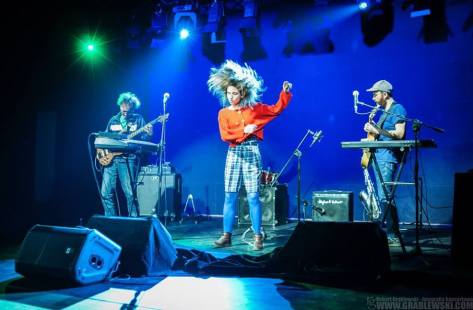 At the beginning I wanted to ask what is Na Tak. Where did it come from and what does it represent?

Dorota: One day I came to Piotr and Sebastian to a Bychawka rehearsal. I did not know them before, nor their music. But when I heard how and what they play – I mean some kind of sensitivity to music – in a moment I made a decision regarding my future. I decided that, together with them, I will seriously deal with the music, which I have not thought about before. And so was created Na Tak.
Piotr: Line up has since changed, people came and leave. In 2011, the final line up was made, and from that moment actually the story of the three of us begins.

You claim that you follow mainstream New Wave, but people can hear and see in you a great deal of inspiration from artists such as Imogen Heap. But how you, as a trio, see yourselves in comparison with other artists?

Seba: To be honest, the work of this otherwise very talented lady had no direct or even indirect influence on our music. I suspect that we grew up on a similar music and probably hence the similarities. We are children of the same age!
Piotr: Artists in a given time often think alike, and apparently there are still others who have a need to make music in this way. We like playing style, but we use it only as a tool.
Dorota: So hard it is to us to define our music. Hence, these not entirely successful for determining the time used which , in order to bring our music to the audience. There was avant pop, minimal pop, electro pop , every time someone approached after the show and said that we make great music, but the description on our website does not reflect what we actually play. Recently, our friend noticed that after all we’re playing classic krautrock and that we stick to that (laughs). And we used new wave because it was roomy style in music and in a sense we are followers of it.

Following this path, what is your inspiration? Probably each member of the band is inspired by something individually.

Piotr: First of all, we do not play what we are listening to. And we are listening to various music. If I would have to confess, I’d say in the approach to the implementation of music, it would be Brian Eno.
Dorota: What I’m looking for in music is a certain sensitivity that somehow moves me, and then it does not matter what genre it is, or artist, or that this is just one song for this artist.
Seba: The work of Frank Zappa – the basis for further conversation.

You say you are romantics who believe that you can change the world. What then, is your driving force in this romanticism?

Dorota: Literature and music, works of sensitive and thinking people are our driving force.
Piotr: Luckily we still believe in humans, for example, I draw strength from not avoiding the pain or difficult moments in life. I try to take life the way it is, and in this I see beauty. The world is not only a joy, a lot of great thoughts arose from suffering. But of course the point is not to force suffer (laughs). Difficult things simply happens. Besides, we also believe in our abilities and sense of taste and do not doubt in what we do.
Seba: The driving force is undoubtedly the belief that by playing and singing for people and to people we share with them our point of view on the world and life. However, we don’t expect that we will change their lives, but that our point of view will enrich their own worldview.
Dorota: In addition, very inspiring is that we are at the same time a harmonious package, we not only have the same goal and the level of determination, but also musical sensitivity and insights on the world, we’re just good friends, we support each other and trust each other. Then we can confidently gain the highest peaks.

You played so far in several major Polish cities. Does this mean that you can see yourselves only on the stages of clubs in the major cities or whether you anticipate (or you’d expect it) also shows in smaller cities? Or maybe you dream the other way: to perform before the audience abroad?

Dorota: We’re willing to play in smaller towns such as Świdnik or Kraśnik as well. We like a bit more intimate atmosphere of pubs and small clubs where we have closer contact with the audience. Many times we were pleasantly surprised with how closely people listen to music and texts, how they trace the relevant similarities, how they comment. But on the other hand I think that our music would sound good on stadiums too and of course we are curious what will be the reception abroad.
Seba: Every audience is worthy of respect, if they come to a gig to take a part of something valuable for themselves.

The “13” appeared. How would you describe your music to people who have never heard about you and your music?

Seba: That it is raw, beautiful and true.
Piotr: This is a stylistic reference to the current new wave, but not only, because you can hear on the album an alternative rock, club music, dancing, mentioned krautrock, and for curious listeners even jazz music as well. But it is not a hybrid of these styles, only some feeling, impression and need. The lyrics speak of the contemporary man in the age of consumerism. It is greedy and absorbed gaining of illusory position, the one created by the system. And yet, at heart, each of us would like to be romantic (laughs).

How did the work on the album went? Did you have a plan for it or you flew with the mainstream improvisation and spontaneity? Were you expecting more that everything will come out during recording or everything was planned at the beginning of the work in the studio? Or maybe it was a “planned improvisation”?

Piotr: The registration of the ideas went quickly. After few days we had a plate shape. But the implementation took us about one and a half year.
Seba: I’m sure a lot of things has to be prepared before starting the work on the album. The reality, however, absolutely verifies all our “fantasies” and there comes a moment in the production of the album, in which you need to answer the basic questions. Why am I doing this? To whom I address the information in the music? Is musical – verbal content sufficiently understandable to a potential audience? Won’t it be wrongly understood? Recording a CD is a responsibility and not, as many believe – just great fun. When you find an answer to these and many similar questions, you can really begin to work on something that people will listen to, that they will spend their time on, for which they will pay the money, and something, as you assume, will be present in their homes on the shelves and in their players for many years. The answer to this question is not at all simple. We are convinced that what we could make from the ideas we’ve planned, we’ve already completed . On this record, there is not a single sound, which would be dissatisfied. The album was created in a sense in the context of creatively processed improvisation. The rest remains a mystery of our craft.

On what Na Tak will be focused this year, apart from gigs to promote the album “13”?

Piotr: At the new material. We already have an idea of how our third album should look. We have already started work on a single promoting this album.
Seba: I hope it will be more direct than “13”. That will be even harder referring to feelings. This does not mean that there will be no room for reason. We are not in danger of stupidity.
Dorota: Well, we still have a lot of work on this, so that people know about us, because in the flood of music it’s not easy.

Thank you for your time and I wish you many successes! 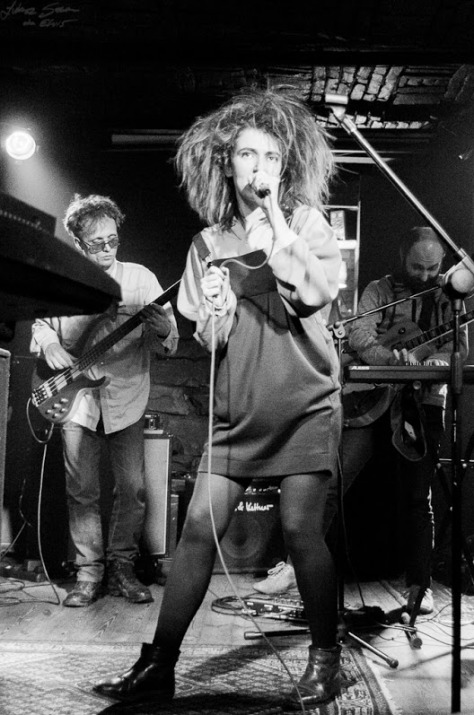